The Case for the Maker's Diet 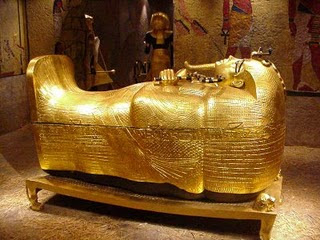 Question: Do you think the following statistics are traits of a healthy people?
All the common signs of an incredibly healthy people, right? Think again. Even with all of the money we spend on medical costs each year ($800 billion) these diseases still plague our citizens- stealing energy, vitality, and life from millions of Americans and their loved ones.

All of these diseases are diseases of lifestyle. Did you know that these diseases are still uncommon among "primitive" people groups still living today? Or did you just think it was normal for you and all your loved ones to die of heart attacks, cancer, Alzheimer's, strokes, or wind up in a nursing home, incapacitated in your final years? I used to. I know this may all be new to you. You may be cringing at the thought that this illness is all so...preventable. But is it really? Consider this.

The Egyptians were also the leading civilization of their time. They were the most advanced in every way: medically, culturally, and technologically. Not only did they invent the calendar and hieroglyphics, but they developed systems for making paper out of papyrus reed plants, and operated looms to weave cloth into clothing. Because of their clever invention of mummification (see King Tut inside his sarcophagus above) modern day scientists were able to discover what diseases ailed the ancient Egyptians.

Guess what their upper class died of? It will sound familiar to you- osteoporosis, arthritis, heart disease, and malignancies similar to today's cancer. And guess what the Egyptians liked to eat? Seems they had a penchant for processed food just like we do. Egyptian tomb scenes show wheat being processed 13 times before being made into bread. Just like our white flour and processed breads.

This was not true for all Egyptians, however. The majority of peasants and workers were not "rich" enough for such processing, and research shows they likely ate a whole grain bread. Lucky for them, because in addition to the diseases listed above, mummy x-rays show that the ancient Pharaoh's and their families, and the nobles of the land suffered from painful spine conditions. In particular, one wife of a Pharaoh is shown to have suffered arthritis of the spine, and acute scoliosis. (Curvature of the spine.) I doubt she made it out of the house, err, palace, much.

It has now been proven through laboratory testing that the deficiency of the trace mineral manganese (particularly in pregnant mothers) causes scoliosis, buck teeth, malocclusion (where the upper and lower teeth do not align properly) and impacted wisdom teeth. So how does that all tie in to the Egyptians? When the bran and germ are removed from wheat grains (as they are in our processed bread, and as they were in the Egyptian nobility's bread) manganese virtually disappears. See the connection between diet and disease?

Next we will look at the connection between the healing foods God gave us to eat, and how people following God's ways of doing things have thrived throughout history, (particularly the Jews) even in the midst of extreme sickness and death swirling all around them.

So, when it comes to your health, my question for you is: Do you want to live and die like an Egyptian, an American, or like one of God's people?

Catherine
Welcome to Maker's Diet Mom! I'm a young housewife living in the Midwest, loving my husband and sons and passionate about living life on the Maker's Diet!

Promote Your Page Too